by Useless Pieces of Shit 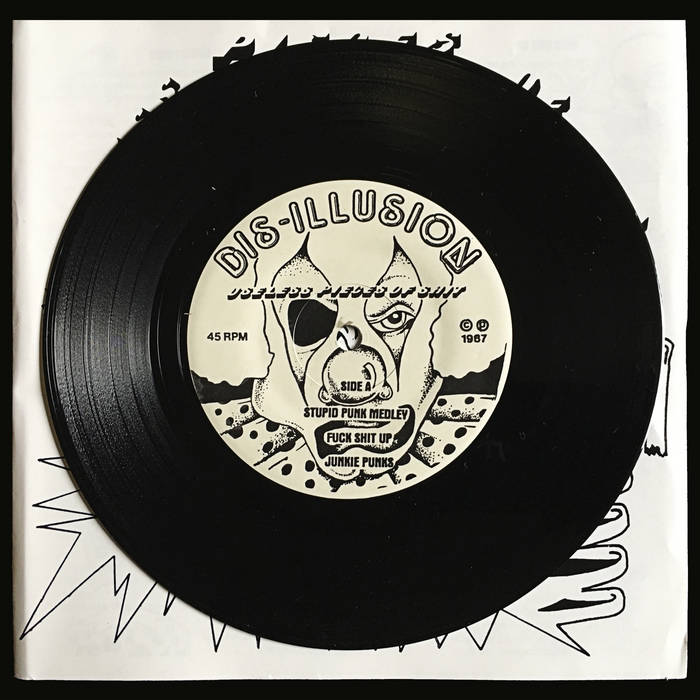 After completing the successful Stupid Punk U.S. Tour, Useless Pieces of Shit knew it was time to head back to the studio. With the Stupid Punk Package selling out at every show they knew they needed vinyl to sell, fast! The plan was to record three different 7 inch vinyl records. These records would be released separately and Fuck Shit Up was the first released. These sessions were with a new vocalist, Dumpy Pieces. Dumpy was the roady on the tour and when Sleepy moved back to El Paso to get married, he was a perfect replacement.

After being sold out and unavailable for many years, these last few copies of the original "Fuck Shit Up" 7" vinyl record are very rare and very limited. There's only a few left so order now before they're all gone and don't miss out.
ENJOY! And FUCK SHIT UP!!!!

WHY ARE THERE TWO DIFFERENT RECORD JACKETS?
The original cover was produced before the art could be finished by Bruce Lee (U.P.S.'s resident tattoo artist). The band was under a tight deadline to get the record out and the cover art had to go to the printer. Technology being what it was back in 1987 and the band's lack of access to it, I was never really happy with how the cover jacket came out.
Now fast forward to 2012! Computers in every house, home recording studios, modern ink jet printers, the internet, and it was that easy to remake the cover closer to the way we would have loved to have made it back in 1987. I have also enclosed the original cover so that if you want, it will keep any collectors value.
Slug Useless
Disillusion Music Label